An informal tale of my journeys 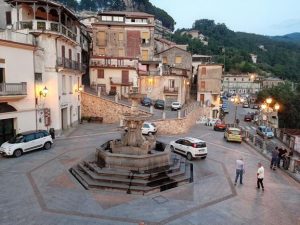 Out of Tropea, you can either take the provincial road SP17 or state road SS522 along the coast, to arrive at Vibo Valentia from where you can then start to climb towards the Serre either north-east towards Sant’Onofrio and Simbario or south-east through Soriano Calabro. Regardless of which road you decide to take, the Serre of Calabria will be your endpoint. This a vast mountain area that extends along the Calabrian Apennines starting from the Sila in the North and ending in the Limina, the gate to the Aspromonte mountains at an elevation of 2000 metres.
END_OF_DOCUMENT_TOKEN_TO_BE_REPLACED

World Saving Solutions from Unexpected Sources. The answers are local.

It is inconceivable that many, whether by choice, lack of interest or unawareness, continue to ignore the environmental and climatic changes that are taking place. Since the late sixties, scientists and environmental groups have been sounding the alarm: we are on an irrevocable collision course with disastrous agents of change fuelled by consumerism, greed and a relentless onslaught of technology. END_OF_DOCUMENT_TOKEN_TO_BE_REPLACED

Trip to Calabria and Sicily: Tropea

Our tour continues today with a visit to Tropea.

Tropea is about thirty kilometres south of Pizzo Calabro. One of the most famous seaside resorts of the South of Italy, Tropea is certainly a mandatory destination for those visiting Calabria.
END_OF_DOCUMENT_TOKEN_TO_BE_REPLACED

Included in Price: Taxes and airfare from Toronto in economy class, private, exclusive, small group tour, 11 nights’ accommodation in 4 and 5 star hotels, Luxury tourism transportation throughout tour, ferry and airport transfers. All breakfasts and most dinners as per itinerary. END_OF_DOCUMENT_TOKEN_TO_BE_REPLACED

Jordan: a hidden gem located at the crossroads of three continents.

Jordan is considered by many to be the melting pot of civilization. It’s richness in historical, cultural, and religious elements gives it a privileged place in the Middle East. A politically stable, calm and safe Middle Eastern country, Jordan is a touristic hub, the home of many internationally renowned restaurants, luxury hotels, attractions, beaches, mountains, deserts, lakes and resorts

Last November, we were part of a FAM trip, sponsored by the Jordan Tourism Board.

Our Royal Jordanian Airlines direct flight from Montreal landed in Amman, the capital city of Jordan. With over four million inhabitants, Amman is one of the most visited cities in the Arab world. In spite of ever-greater influence of modernization, science and technology, Amman manages to preserve the rare and dual personality of a modern metropolis and ancient crossroads of peoples and civilizations at the same time.

What makes Jordan attractive to tourists is undoubtedly its rich historical heritage that dates back 7250 years before the birth of Christ. Among some of the most impressive Neolithic artifacts are the statues of Ain Ghazal, which you can admire while visiting the national museum of Jordan, in the Amman Citadel.

In ancient times, the city of Amman was known as Rabath Ammon. An ancient trading post, it later became an important Roman garrison and was renamed Philadelphia. As you enter the Citadel, not far from the center of Amman, you will be amazed to discover perhaps one of the world’s most beautiful and best preserved Roman archaeological sites. An entire Roman city unfolds before your eyes as you walk through the ancient avenues, flanked by astonishing monuments and exceptional architectural treasures.

After a brief visit to Jerash, another hidden gem of the ancient world, our tour continued on to Petra. A little less than three hours south of the capital, not far from the ecological reserve “Dana Biosphere”, opens a series of canyons through a rocky and desert area, leading up to one of the new Seven Wonders of the world.

A natural setting for numerous adventure films, Petra is one of the most important travel destinations, on par with Machu Picchu or the Great Wall of China. The ancient entrance to the capital of the Nabataeans, is about three kilometres from the new town of Petra. You can walk, or if you prefer take a ride on the back of a mule, a camel, or a donkey to arrive at the “treasury”, the ancient doors of the lost rose city.

There are no adjectives that can adequately describe the beauty and enchantment of these places: the sounds of traditional music; the garb of nomadic Bedouin peoples who welcome you with open arms; the rich aromas and flavours of food and drink prepared according to age-old customs; and the astonishing architectural marvel of the buildings carved in the rocks, is, to say the least breath-taking.

On the opposite side, just over two hours north of Amman, lies the ancient, biblical baptismal site on the river Jordan. This site is not only a key destination for tourist groups from all over the world but also a place of pilgrimage for many people of different religious backgrounds. Tradition has it that it was here, on the west bank of the Jordan, not far from Nazareth and the Sea of ​​Galilee, that Jesus was baptized by John. Certainly one of the highlights of our trip was the opportunity to bathe in those same waters and walk on the same land where Christ, the prophets, and the Saints once tread.

There are many other fascinating places to visit in Jordan from Mount Nebo, where God showed Moses the Promised Land, to the Moab plains beyond, where one glimpses the ancient city of Jericho. It is here that you will admire the best-preserved mosaics in the world; depicting the “Story of Creation” and the “Tree of Life”.

Further down, along the King’s highway, you will have another unforgettable experience as you float effortlessly in the salty waters of the Dead Sea or give your skin a youthful make-over with the mineral-rich muds readily available at one of the numerous five-star resorts in the area.

For a truly unforgettable experience, Jordan is a must-see. Add this destination to your bucket list for a first-class holiday, guaranteed to be of immense cultural, historical and spiritual value.